Comedian Louis C. K. famously noted that “everything is amazing right now and nobody is happy.” We live in a world of unprecedented prosperity and are much better off then our parents and grandparents were. Since 1950, the average house size has doubled, while the average family size shrunk. We’ve gone from kids sharing a bedroom to each kid having his or her own bedroom. In 1980 a second land line phone was a luxury. Today teenagers carry iPhones with more computing power than most 1990s era PCs.

Regardless of the progress, the recent recession and sluggish recovery has turned our attention to the growing gap between rich and poor.

Even The Economist — the one-time bastion of free market ideas — is now wringing its hands over growing income inequality around the world, declaring “a dramatic concentration of incomes over the past 30 years.”

Income inequality is not such a big deal if everyone is winning.

More important than figuring out whether the income gap is growing, the much bigger question for an economist is: Does it matter?

The overwhelming consensus among economists is … maybe.

One of the key studies finds that income inequality retards growth in poorer countries, but encourages growth in richer countries. In the U.S., research finds that increased incomes among the top 10% of income earners in a state are associated with higher statewide average incomes. In contrast, the International Monetary Fund concludes “reduced inequality and sustained growth may thus be two sides of the same coin.”

Since the data don’t provide a very satisfying answer, the next question is: Could it matter?

Can we shrink the income gap?

The knee-jerk response to a growing income gap is more progressive income taxation. However, increased taxes to redistribute income do nothing to foster economic growth.

On the other hand, the figure below shows that growing employment may be one powerful way to slow the growth of the income gap. 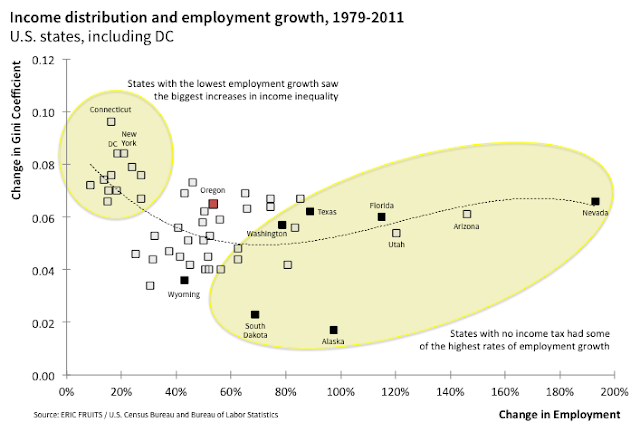 While it’s true that since 1979, income inequality has increased in every state, there are wide differences among states. For example, inequality increased by four times as much in New York and DC as it did in Alaska and South Dakota.  Income inequality seems to be an East Coast problem first, followed by the Rust Belt states of Illinois, Ohio, and Michigan.

Also striking is the fact that employment grew faster in states without income taxes (shown by the black markers). These states also did not see an change in income inequality that was much different from the U.S. average. In this way, reducing income taxes may be a way to grow employment without necessarily increasing the income gap.

There is no consensus among economists that income inequality has any impact on economic development. However, policymakers seeking to make income distribution more equitable should turn first to finding ways to make a bigger pie by growing employment rather than figuring out how to cut the pie into smaller slices by tax-and-spend redistribution programs.